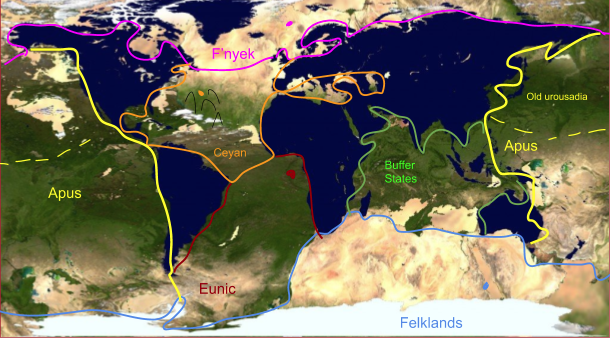 Map of the Earth 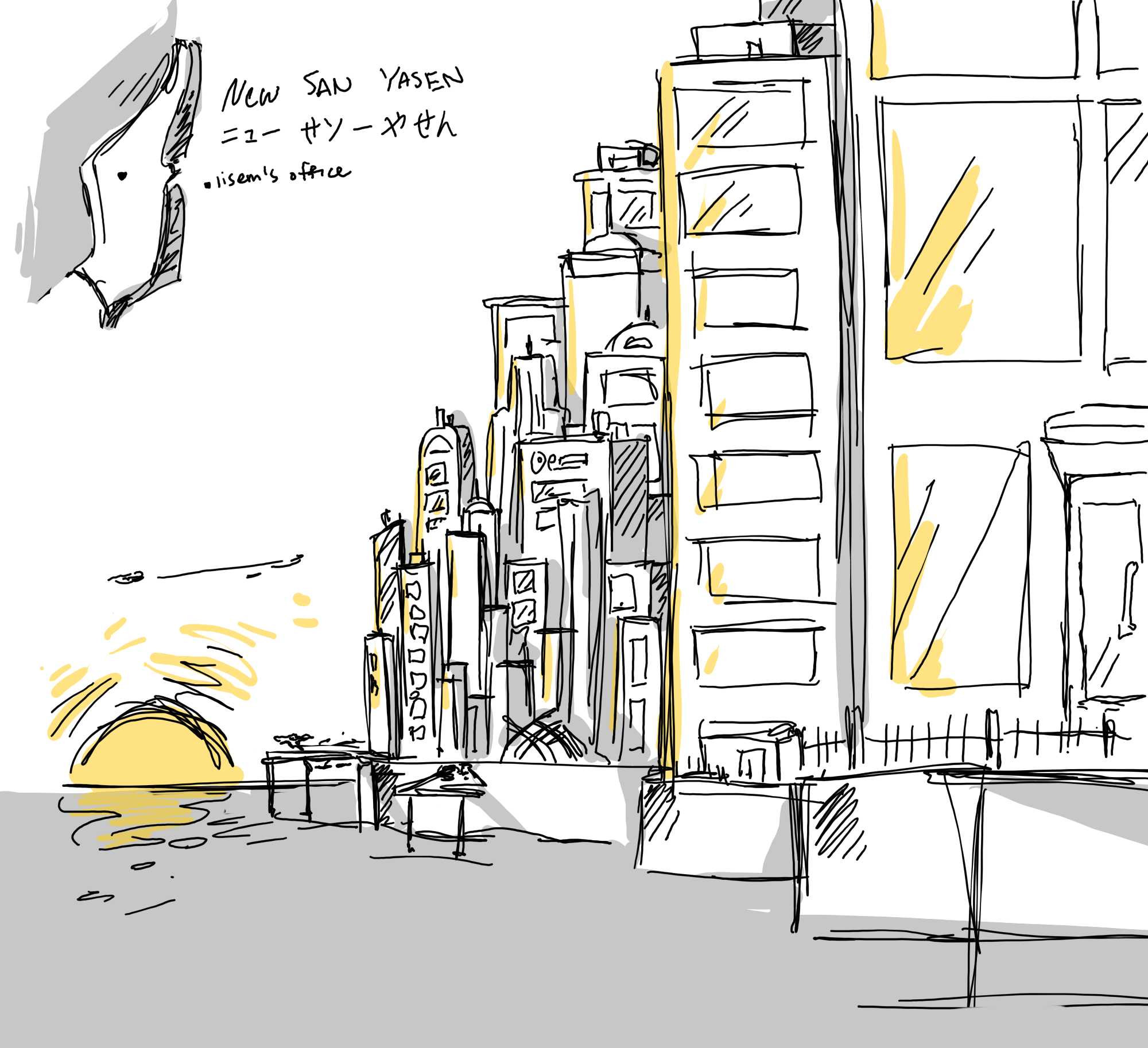 Language- Sadiric (Lisem and Xerus speak this, as well as most assassins, but it’s fairly uncommon outside of old urousadia.) Gained official independence (as apus) when Lisem was 15, in 1694. Before then, Urousadia had been captured by F’nyek in the 1500’s, and riots had started occurring around 1660. However, thanks to the assassintation of the UUS king in 1961, the current Prime Minister (Lisem Rossem, 12 at the time) rose as a powerful revolutionary and took the charge. While the previous leader was a king, he demanded change within the government, and plunged the UUS into the five year war for independence from F’nyek. As the war progressed and the UUS seemed to be winning, people recognized the kid’s talent and kind of let him take over as master tactician of their armies. When their independence was finally gained, Lisem insisted that a democratic poll be taken to choose the official leader, though he won with 70% of all votes. He then spent a couple months campaigning from buffer territory from buffer territory, asking for their allegiance. He managed to claim a good half of the territory through promises of peace and protection for those who didn’t manage to join, and thus, Apus was formed and a strong bond with the buffer territories was formed. 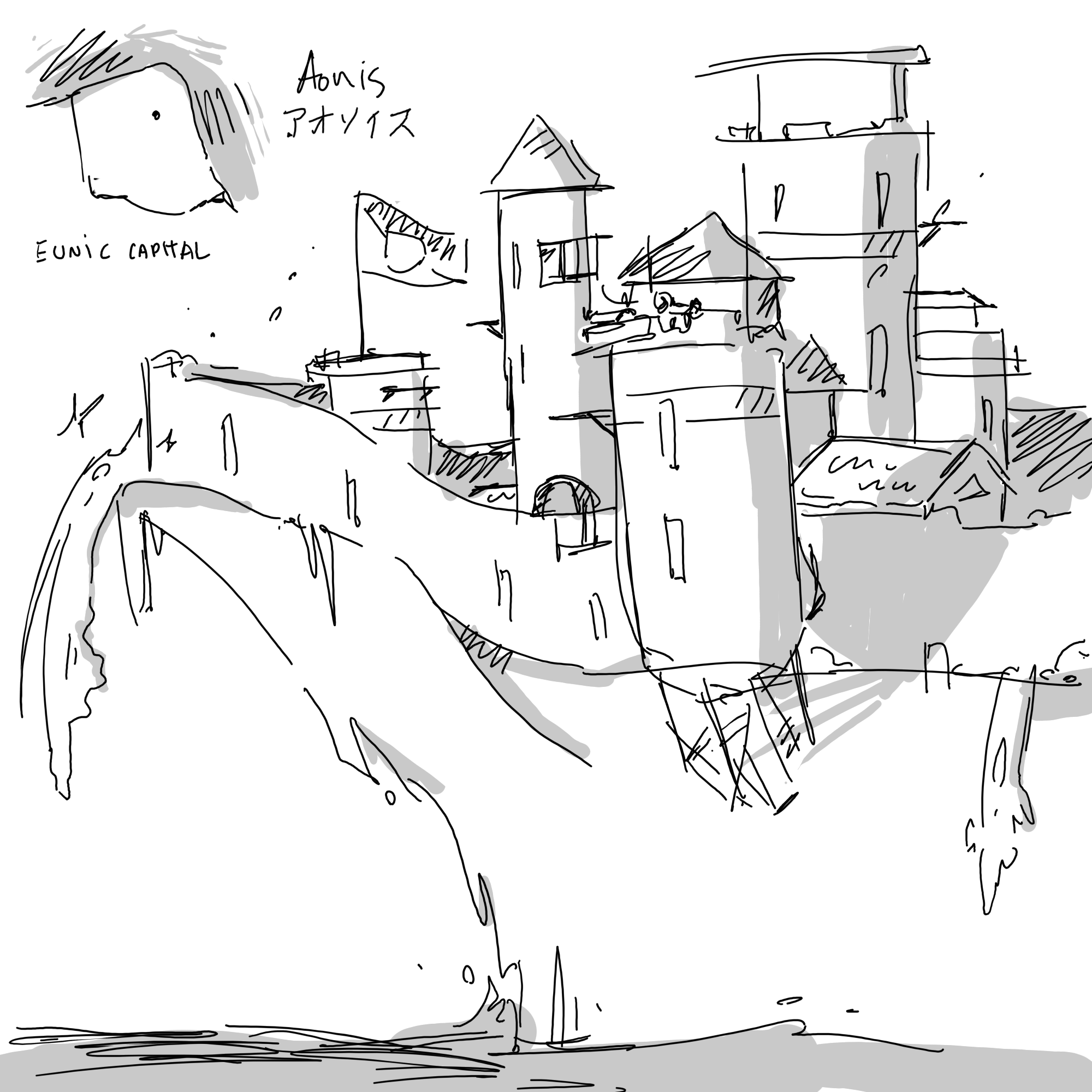 Language- common. Eunic was originally a state that was against Apus in the 5 year war. Apus is still kinda pissed at them about it. Essentially, they’re always proving their loyalty to Apus and they keep having to give them more resources so Lisem doesn’t run a brigade through their entire weak military state. Their queen yielded very easily when it was clear F’nyek wasn’t going to win, so Apus doesn’t consider them a strong ally at all. However, they have a lot of military supplies, so they take advantage of that. The leader is considered a king/queen, but is decided by battle when the previous leader dies for any reason or gives up the role voluntarily. However- the truth is, Most of Eunic’s militia is powered by psychic stuff that even the general public doesn’t know about. They sided against Apus in the 5 years war bcs Fnyek is another Adrestian territory, and their military is called the Empire of Adrestia. They pretend to be weak, but in reality their weapons cause them to be very strong against normal armies. They also have a very strong Navy. They’re sort of a sleeper agent, but their reach is quite far, because of the church of Adrestia having hands in all sorts of pies across the world. While many people genuinely believe in Adrestia, the organized religious party itself is very corrupt. Their aim is to revolutionize the world and convert it to a domain for the “chosen ones,” those who can use psychic powers. They aim to destroy the lesser and build a utopia for those remaining.

Language- F'nyeki. People in F’nyek really don’t like Apus. People in Apus really don’t like F’nyek. During the war, Since F’nyek was such a superpower, everyone was sure they would win. And though the leader had just been hospitalized (due to old age,) his young kid of 17 at the time (Garic Fenyek, 1691) had taken over to lead the 5 year war. He actually did a pretty good job, almost rivalling Lisem, but kept winding up just a bit short every battle. His empire is known as being especially hard on it’s soldiers, ignoring the human costs to get an edge in the war. But history is also written by the victors, who happen to not be F’nyek. Eunic and F’nyek used to be close allies until after the 5 year war, when Apus made Eunic denounce F’nyek to maintain a friendly alliance. The leader is decided by birthright.

Language- Ceyan. A small but strong county based in nobility, Ceyan is run by a house of six princesses, who are the ruling leaders. The first-born son is always the one to give birth to more princesses, who then run the country along with the previous ones. However, the country tends to be fairly secluded and rarely exports or imports anything, bar Apus trade. The country has a rich and cultured art world. Sort of a mix of china and Africa? It has strong cultural values/traditions that they feel need to be followed very closely, and a very strong military. Has a lot of luxury items like gold and silver, and a lot of mountains

Language- Common. Protected by Apus. Former Felkland territory that gained independence by simply getting their shit together and forming a coalition with a leader. They meet every year or so to discuss policy and general alliance, but each state has individual exports that they all trade with almost all countries. It produces a lot of goods for other countries, and a lot of the richer states on the borders of Apus create technology like iphones or computers. These enter the general public through middlemen in Apus so it can be distributed to others more carefully, as under the protection agreement specific to those areas. This is how Apus stops a lot of other countries' developments from being as rapid as them.

Language- Common. The buffer states used to be felkland territory that essentially unionized. They generally don’t have a strong presence, mostly being scattered groups of cities. Most don’t recognize it as a state, but as a continent. The only reason Apus hasn’t taken more of it is because it cuts into the buffer territories areas, which are more organized, and that Eunic is on the other side. Anything Apus could take is essentially antarctica.