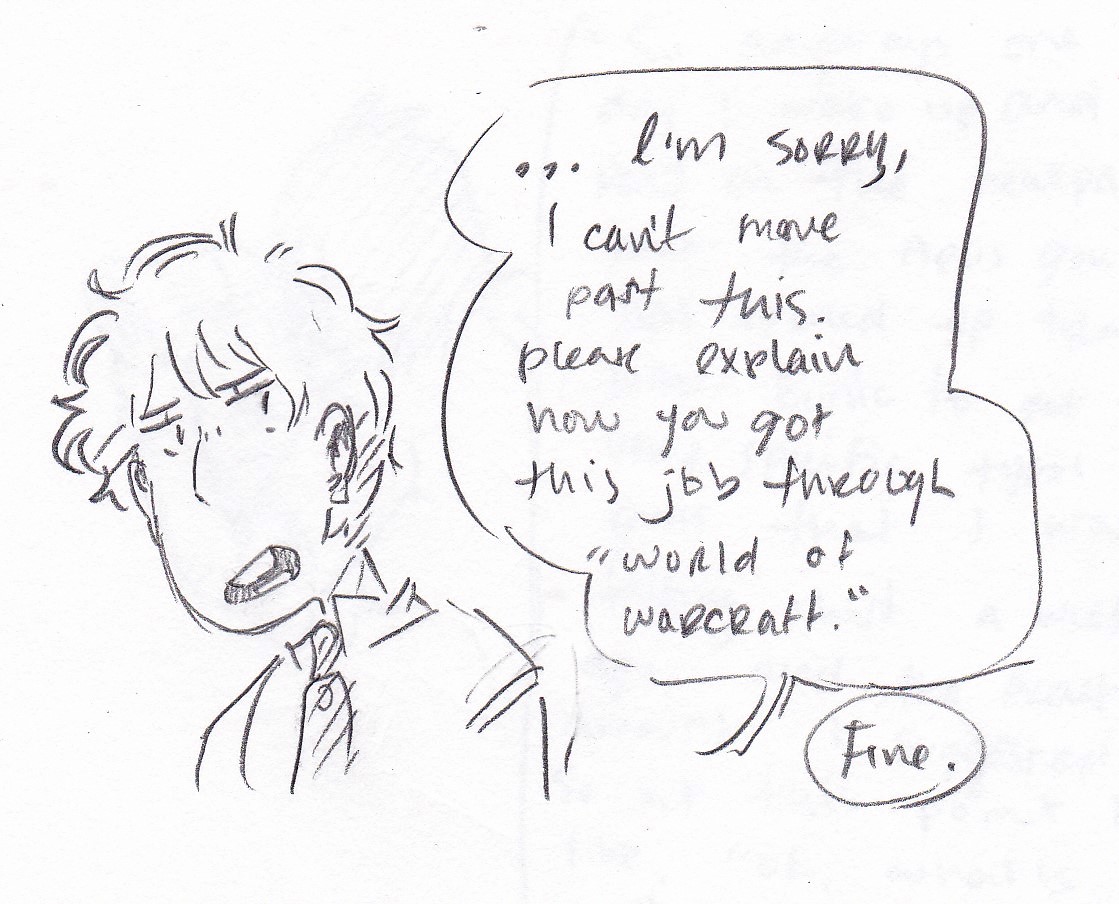 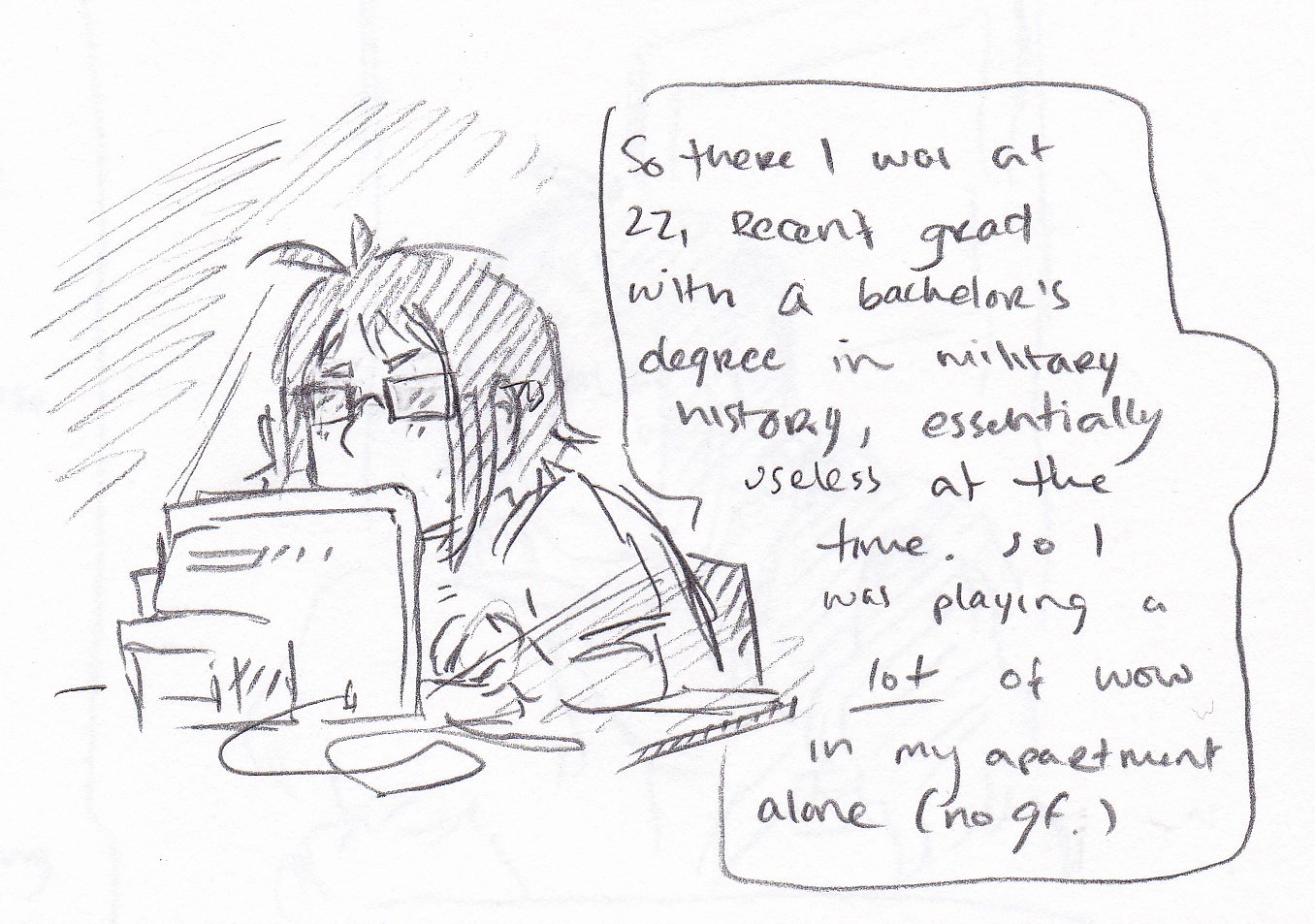 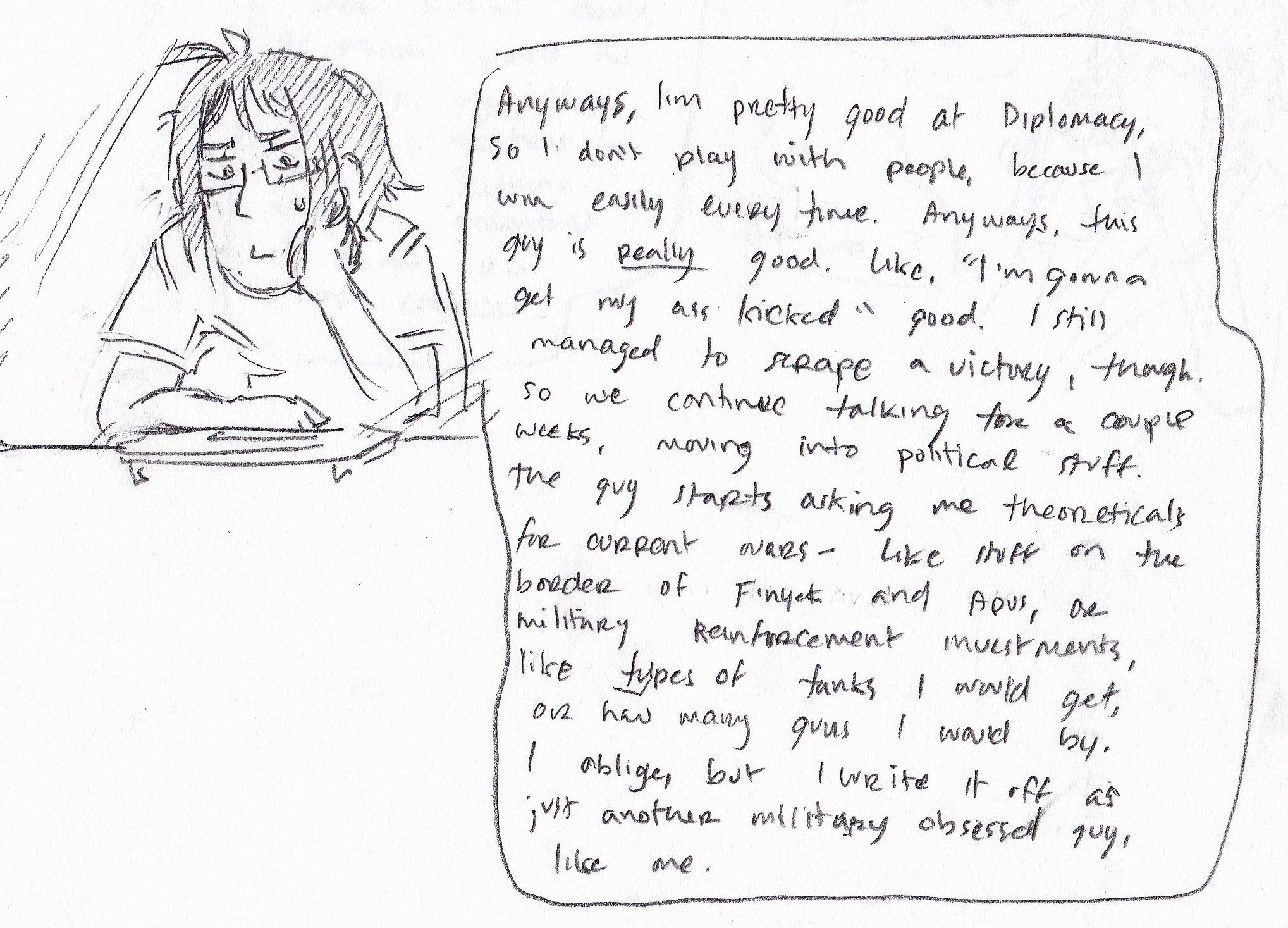 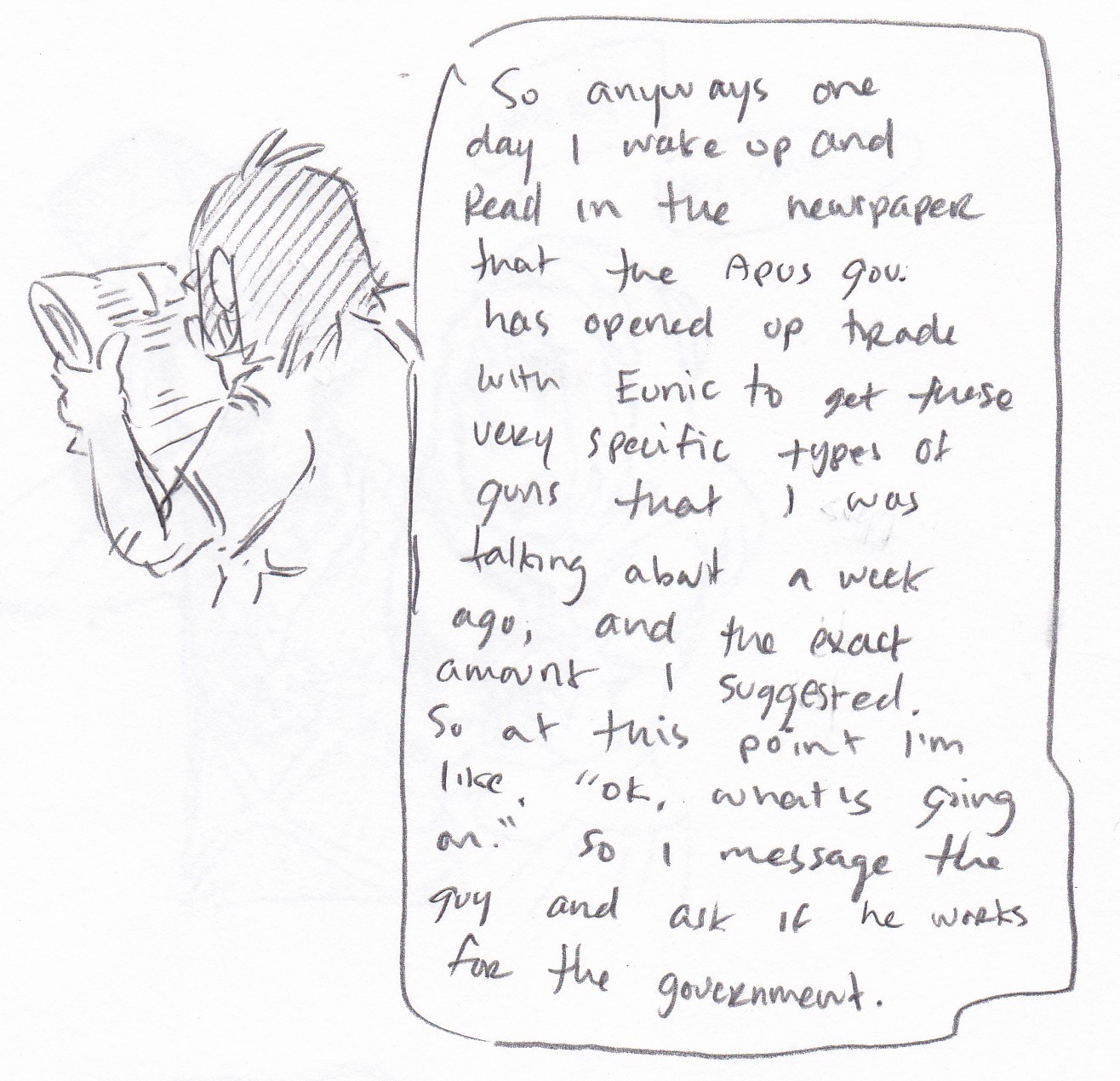 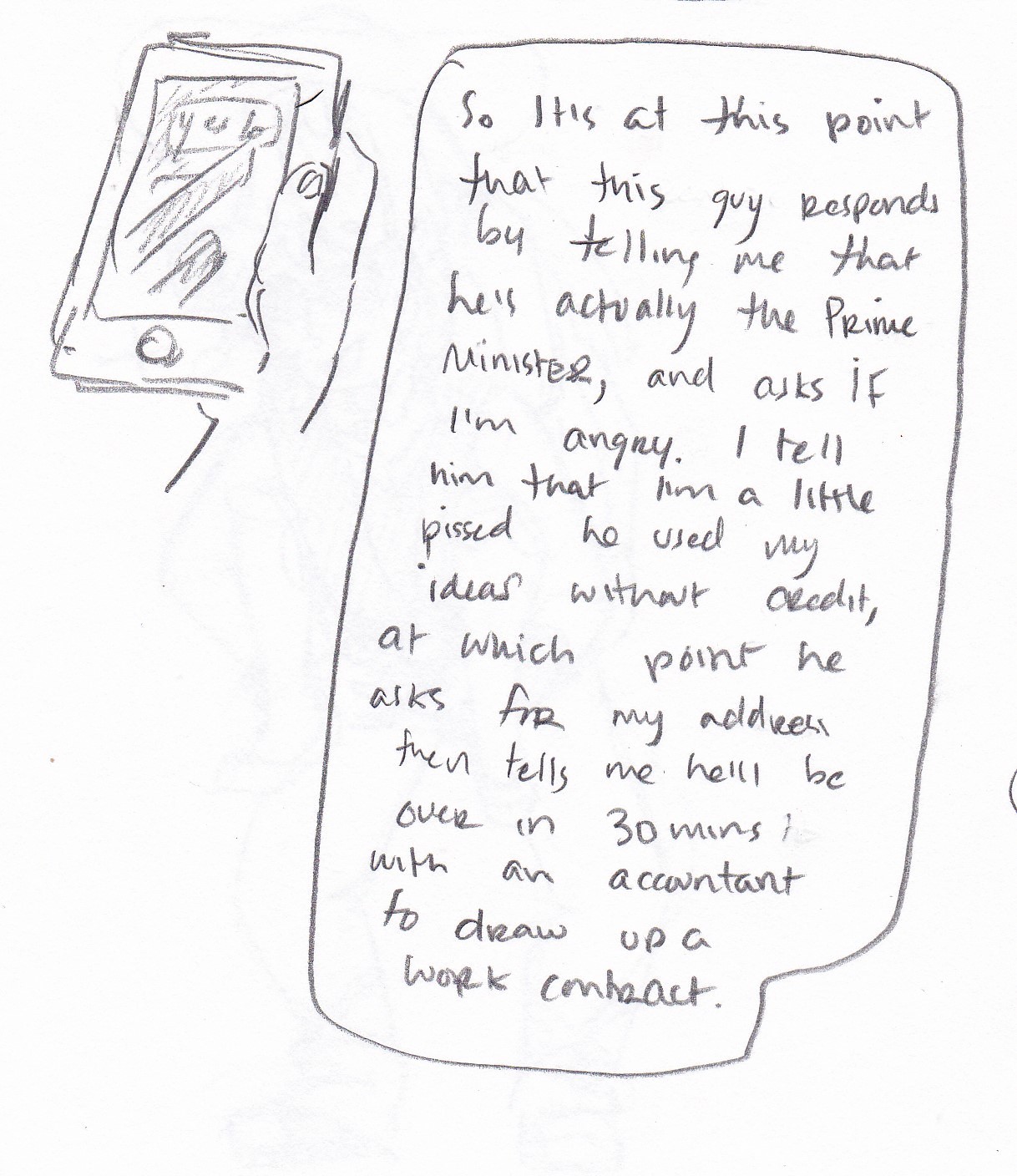 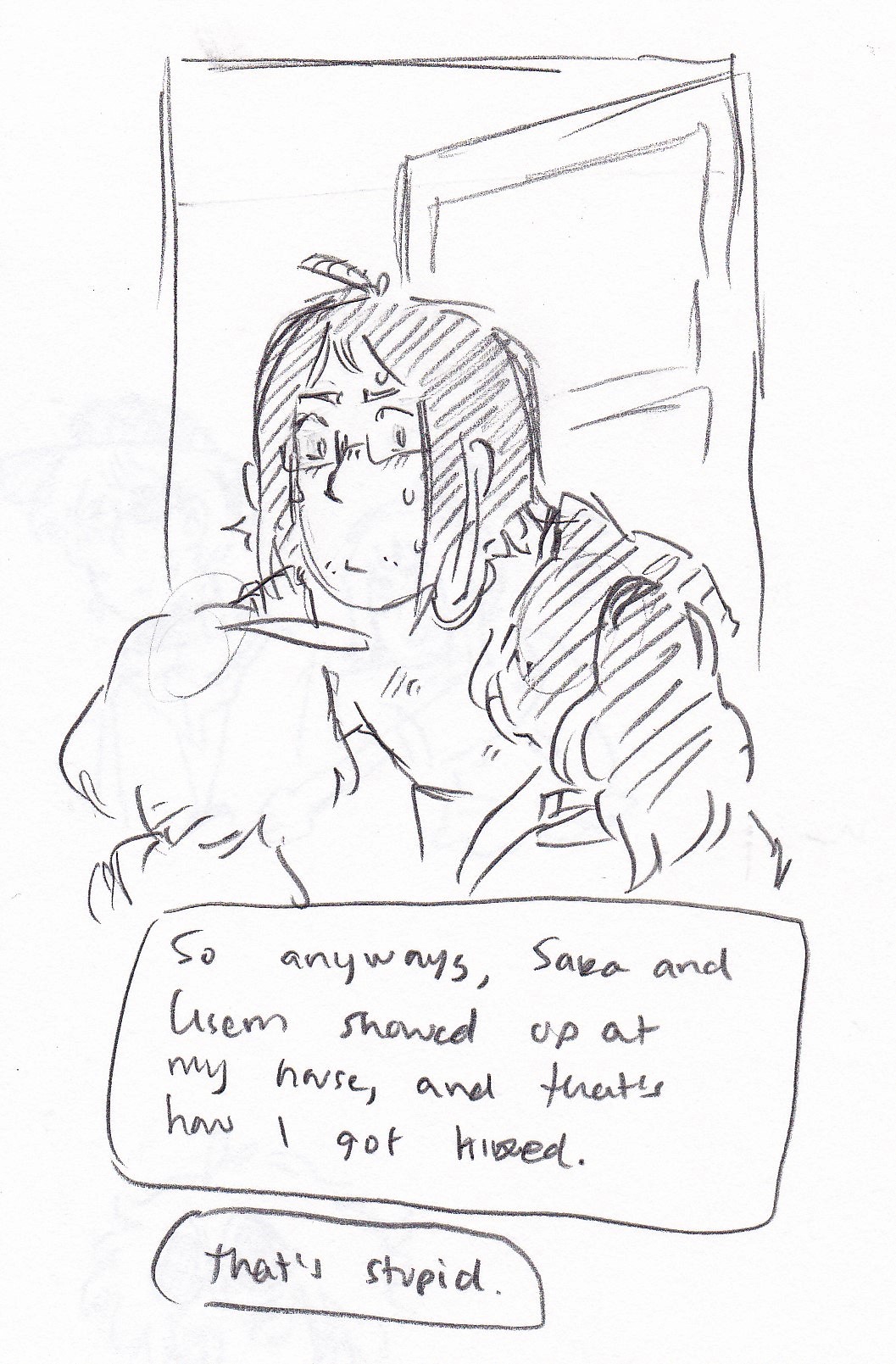 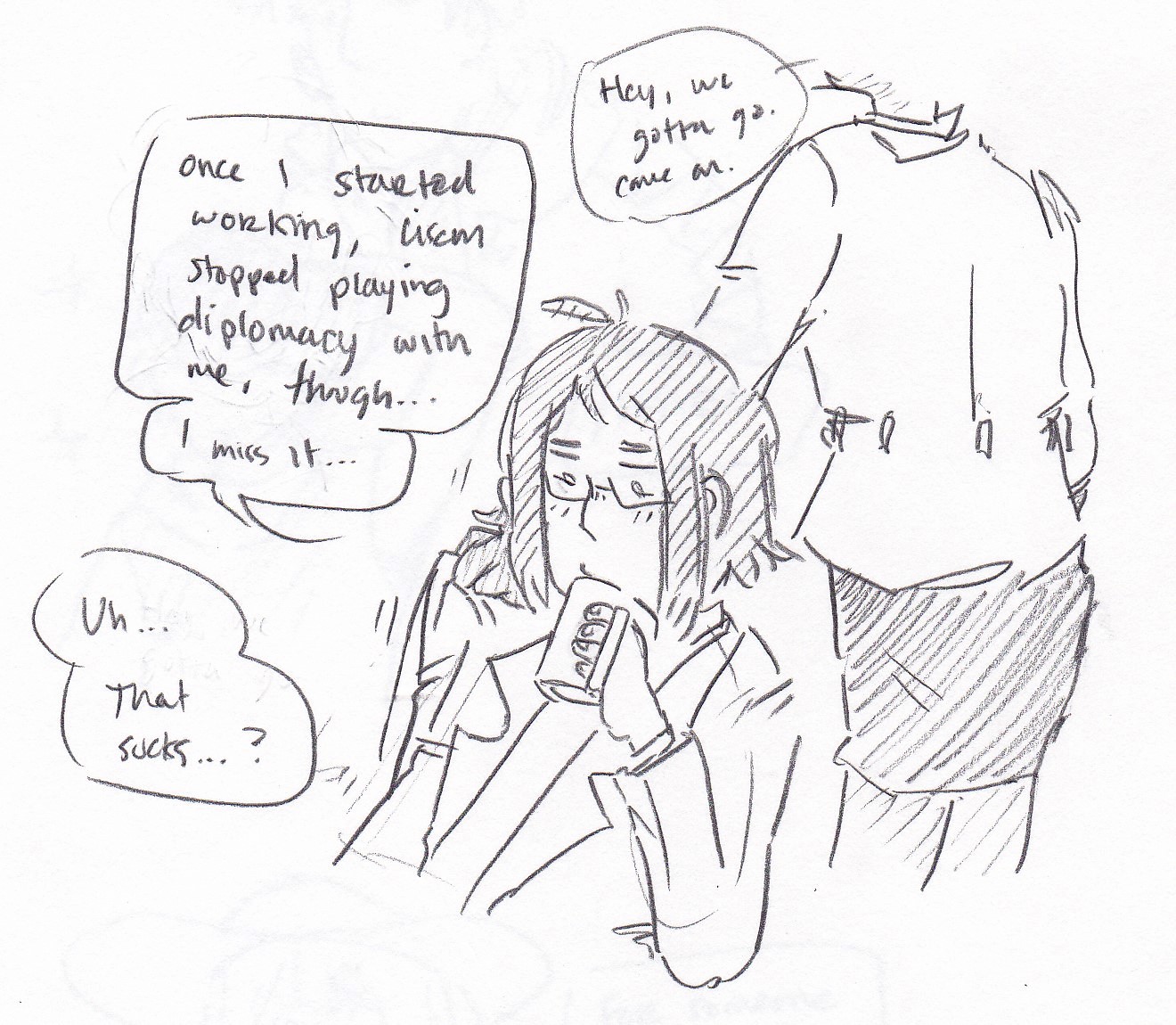 E: “...I’m sorry, I can’t move past this: please explain how you got this job through ‘World of Warcraft.’” C: “Fine.” ... “So there I was at 22, recent grad with a bachelor’s degree in military history, essentially useless at the time. So i was playing a lot of WOW in my apartment (no gf.)” ... “So one day this level 8 idiot guy joins and starts going around asking for info on the blood plague. This happened a good few years back, so most people ignore him. Also, he looks crazy. But I actually got into the game a few months before it, so I know a lot about it. I also just thought it was really interesting. Anyways, we get to talking, and I tel this guy I got a bachelor's in military stuff, and he invites me to play a game of diplomacy. It’s like risk, kind of.” ... “Anyways, I’m pretty good at diplomacy, so I don’t play with people, because I win easily every time. Anyways, this guy is really good. Like, ‘I’m gonna get my ass kicked’ good. I still managed to scrape a victory, though. So we continue talking for a couple weeks, moving into political stuff. The guy starts asking me theoreticals for current wars- Like stuff on the border of F’nyek and Apus. Or military reinforcement investments, like types of tanks I would get, or how many guns I would buy. I obliged, but I wrote it off as just another military obsessed guy, like me.” ... “So anyways one day I wake up and read in the newspaper that the APUS gov has opened up trade with Eunic to get these very specific types of guns that I was talking about a week ago, and the exact amount I suggested. So at this point I’m like, ‘ok, what’s going on.’ So I message the guy and ask if he works for the government.” ... “So it’s at this point that this guy responds by telling me that he’s actually the Prime Minister, and asks if I’m angry. I tell him that I’m a little pissed he used my ideas without credit, at which point he asks for my address, then tells me he’ll be over in 30 mins with an accountant to draw up a work contract.” ... “So anyways, Sara and Lisem showed up at my house, and that’s how I got hired.” E: “That’s stupid.” C: “Once I stopped working, Lisem stopped playing diplomacy with me, though... I miss it...” N: “Hey, we gotta go. Come on.” E: “Uh... That sucks...?”